Volunteer during the Rugby League World Cup 2021 in Sheffield 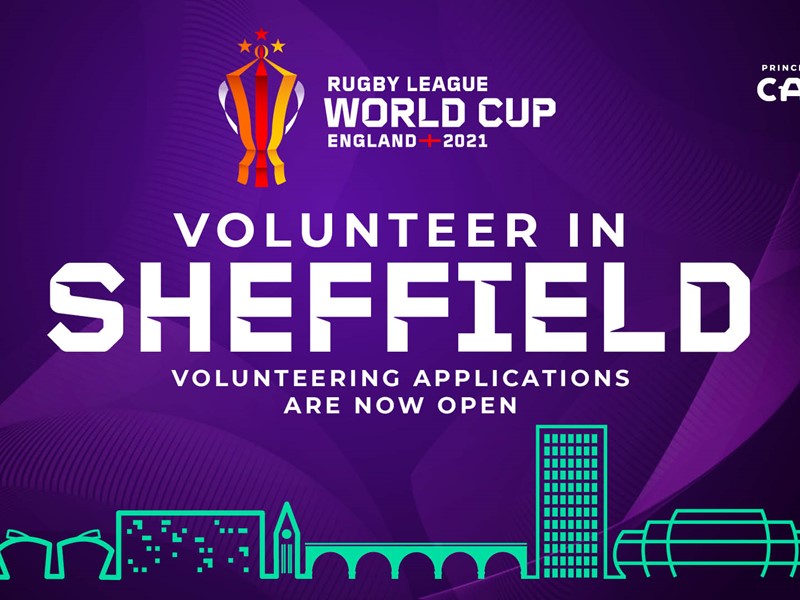 The Power Squad will be made up of 2,000 volunteers who will be the faces of the tournament, showcasing the values of Rugby League as well as welcoming the world to England when the 16th edition of this historic global event kicks off in the autumn.

With hundreds of thousands expected to attend matches and World Cup activations happening across England - and millions more watching around the world – the RLWC2021 team are looking for enthusiastic volunteers to deliver an exceptional Rugby League World Cup experience for both fans and players.

At twenty-one venues across eighteen host towns The Power Squad will play a key role in the delivery of the six-week tournament with a range of roles, including transport, spectator services, accreditation, way-finding, media, content and broadcast support.

Recruitment will be open on 25 February 2021 at 08:00am through an online application process and will conclude at 20:21pm on 23 April 2021. The programme features a dedicated interview process followed by comprehensive training for successful candidates.

Jon Dutton, Chief Executive of RLWC2021, said: “The Power Squad programme will be the biggest volunteer squad ever assembled for a Rugby League event. We want to engage with all ages, genders and communities and build on the incredible passion for volunteering at major events in England.”

"The UK has a fantastic volunteer network which we hope to tap into. A successful tournament cannot be run without our Power Squad and we hope to welcome many new people to the ever-growing Rugby League family to experience the passion, pride and community spirit of the sport."

Sheffield will host 9 fixtures across the competition, including the Wheelchair semi-final double-header staged at the English Institute of Sport, and England vs Greece in the men's group game at Sheffield United's Bramall Lane stadium.

Councillor Mary Lea, Cabinet Member for Culture, Parks and Leisure at Sheffield City Council said: "The Rugby League World Cup 2021 is set to be the biggest and best event in the tournament's history. Those volunteering will be a part of something very special, a huge moment in sport for Sheffield and for Rugby League across the world.

"There are so many benefits to volunteering especially during a major event of this kind that will leave a lasting legacy beyond the tournament and a lasting impression on all those involved. I would encourage local people not to miss out on this fantastic opportunity and register now."

RLWC2021 ambassadors Lois Forsell and Robbie Hunter-Paul will support the launch of The Power Squad application period as well as joining the rest of the RLWC2021 Ambassador Squad at the interview sessions and training days to pass on their knowledge of playing in a sporting event of this scale.

Former England star Lois Forsell said: “I urge everyone in and around the RLWC2021 host towns and cities to take up this opportunity and apply to be a volunteer at international Rugby League’s showpiece event.”

“There is no better chance to be the face of a global tournament in England and with that comes a unique opportunity to play an important role in the biggest and best ever Rugby League World Cup.”

Robbie Hunter-Paul who helped New Zealand reach the final of the World Cup in 2000, added: “As a player you always highly appreciate the work that the volunteers do to provide a platform for greatness on the field of play - without a dedicated team of volunteers the tournament wouldn’t be a success.”

“There is a real correlation between good mental fitness and new challenges and opportunities. In a time when the world is deprived of opportunities like this RLWC2021 is a beacon of light and being part of The Power Squad and experiencing the power of together to make memories that will last forever is really special.”

Apply or find out more information on The Power Squad programme for the Rugby League World Cup 2021 here: volunteers.rlwc2021.com